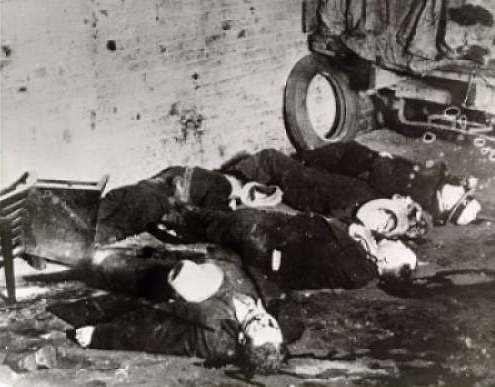 The Saint Valentine’s Day Massacre remains one of the most well-known events in the history of organized crime. On February 14, 1929, seven men associated with Chicago’s North Side Gang were lined up against a brick wall and mercilessly gunned down in cold blood.

During the height of Prohibition and the noir era of law and order, the Italian and Irish gangs in Chicago violently warred with each other. Many officials and historians believe that gangster Al Capone ordered a hit on George “Bugs” Moran, leader of the Irish North Side Gang. Capone desired full control of the organized crime outfits in the city. He also wished to punish Moran for hijacking his liquor shipments. 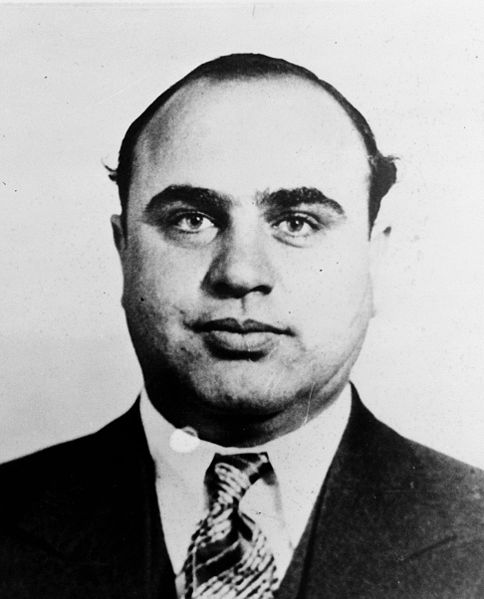 At around 10:30 a.m. that Valentine’s Day, four men carrying shotguns and Thompson submachine guns arrived at a garage at 2122 North Clark Street in Chicago’s Lincoln Park neighborhood. Two of the men wore civilian clothes such as suits. The other two donned police uniforms.

The seven men inside the garage had no idea their ends had arrived. They were Peter and Frank Gusenberg, Albert Kachellek, Adam Heyer, Reinhardt Schwimmer, Albert Weinshank, and John May.

The two assailants in police uniforms walked to the rear of the garage where they found the North Side Gang members. At gunpoint, the intruders ordered them to line up outside against the wall. The two gunmen wearing civilian suits proceeded to pump the unarmed men with lead. They continued shooting even when the victims had fallen to the ground. The two dressed as policemen then blasted the faces of John May and Albert Kachellek with shotguns.

Witnesses state that two policemen led two well-dressed men away with the barrels of their guns after the shooting stopped. This most likely gave the appearance that everything was handled.

When Chicago police officers arrived at the site of the Massacre, they found everyone dead with the exception of two. Highball, May’s German Shepard chained up in the garage, survived the hail of bullets. Frank Gusenberg, suffering from 14 gunshot wounds, was also still breathing. Highball suffered severe trauma and authorities reportedly had to euthanize him. Gusenberg was rushed to the hospital where he died three hours later. Despite seeing his murderers, Gusenberg followed the Mob’s Code of Silence to the very end. When the police asked who had shot him, Gusenberg replied, “No one shot me.” 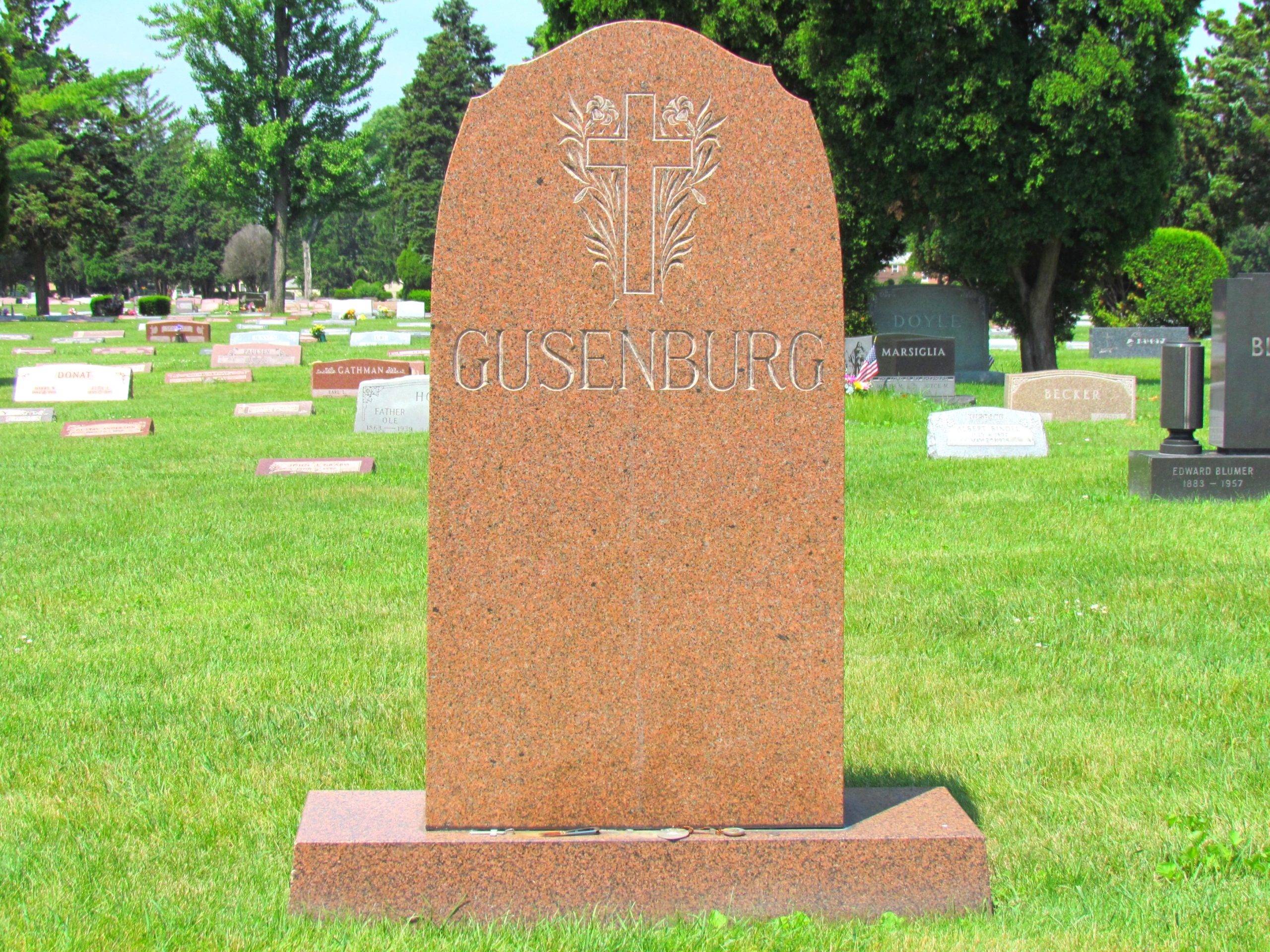 Who definitively fired the guns that killed the victims remains unsolved. It is commonly accepted that the Saint Valentine’s Day Massacre was Al Capone’s unsuccessful hit on George Moran. Capone resided in Florida at the time of the Massacre and never faced charges. The most likely theory suggests that one of Capone’s lookouts mistook one of Moran’s henchman as Moran himself. It was probably Albert Weinshank due to similar physical builds.

Many officials believe that Moran’s gang was set up by Detroit’s Capone-associated Purple Gang and lured to the garage with the promise of illegal whiskey that was hijacked while on its way to Illinois.

Moran left his Parkway Hotel room late that morning and as he approached the garage for the meeting, he and his associate, Ted Newberry, noticed a police car outside. This caused them to backtrack and lay low in a café close by. Other gang members late to the meeting, such as Henry Gusenberg and Willie Marks, spotted the cruiser and avoided the garage as well.

The Saint Valentine’s Day Massacre became a headache for mob bosses all over the United States. Once the public got word of what happened, the outcry was damning. The authorities had to crack down on organized crime, even though J. Edgar Hoover, Director of the Bureau of Investigation, publicly denounced the extent of it.

Investigations uncovered some potential, and highly likely, suspects in the Massacre. Former gangster Fred Burke and Capone gunmen Albert Anselmi and John Scalise appeared on the list, however nothing proved fruitful. Scalise and Anselmi, along with another associate, met their end when Capone discovered their plan to betray and kill him. Burke matched witness descriptions and had a history of impersonating a police officer, but there wasn’t enough evidence to arrest him.

On December 14, 1929, Michigan police raided the home of a man named Frederick Dane. Dane drove while intoxicated and rear-ended another vehicle. He immediately took off but St. Joseph, Michigan policeman Charles Skelly went after him. Skelly forced Dane off the road and jumped onto the running board of Dane’s car but was shot three times and died hours later.

Dane abandoned the car and it was found by police, who could arrest him for murdering Skelly. Based on police photos, they soon realized that Frederick Dane was, in fact, Fred Burke.

The police discovered that Burke stashed large amounts of money, weapons, and ammunition in his Michigan home. Authorities found two Thompson submachine guns among Burke’s possessions. The Thompson guns were sent to the Chicago police who employed forensic ballistics, in its infancy at the time, to see whether these were the same weapons used in the St. Valentine’s Day Massacre. 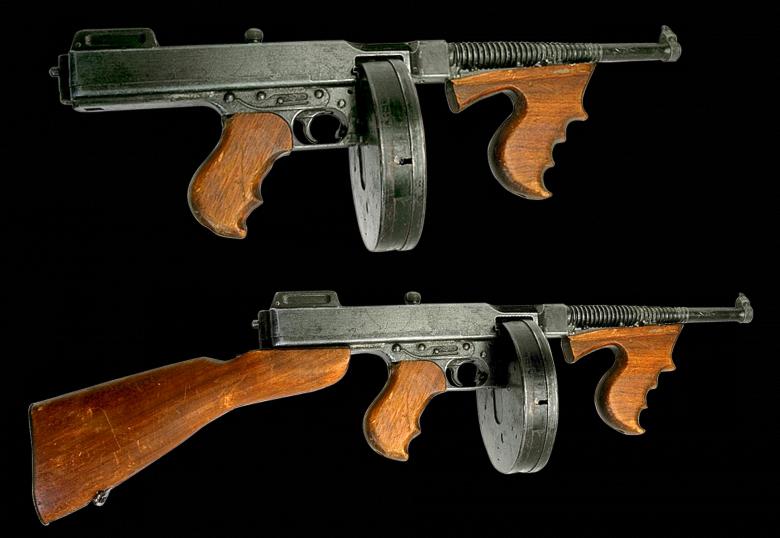 The assailants used Thompson or “Tommy” guns similar to these (source: Stockvault, https://www.stockvault.net/photo/219632/old-wooden-tommy-guns)

Dr. Calvin Goddard, one of the pioneers in forensic ballistics and hired by a Chicago coroner’s jury to analyze the weaponry, proved these were the same Thompson guns that killed Moran’s North Side Gang associates.

No incriminating Massacre evidence further came to light, but the police had enough evidence to sway a jury to convict Burke of the murder of Charles Skelly. It took over a year, but Burke was captured on a Green City, Missouri farm, sent back to Michigan, put on trial, and received life in prison. He died behind bars in 1940 at age 47.

The Legacy of the Saint Valentine’s Day Massacre

The City of Chicago demolished the garage that sat at the site of the Saint Valentine’s Day Massacre and made it the parking lot for a nursing home. The bricks that comprised the wall in which the seven victims lined up against still contain blood stains and bullet fragments. Legend states that the bricks contain an intensely evil energy and bring nothing but misery to those in possession of them. Many of those bricks are privately owned, but a number of them reside on display at the National Museum of Organized Crime and Law Enforcement in Las Vegas. 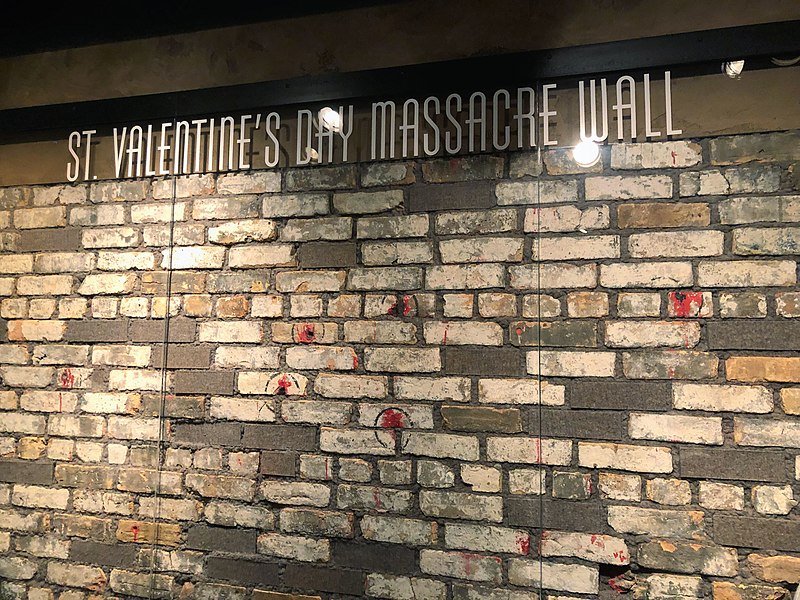 Bricks taken from the wall of the garage (source: Wikimedia Commons, https://commons.wikimedia.org/wiki/File:IMG_6399_Las_Vegas.jpg)

Many theories surrounding the Saint Valentine’s Day Massacre persist to this day. Some have credible sources and have corroborating narratives, such as gangster Byron Bolton’s claim to have taken a part in the planning of the Massacre along with Burke, Capone, and others. Some are just speculation, such as that the police committed the Massacre. Whoever planned and executed the Saint Valentine’s Day Massacre pulled off one of the bloodiest, most violent “whodunits” in history. 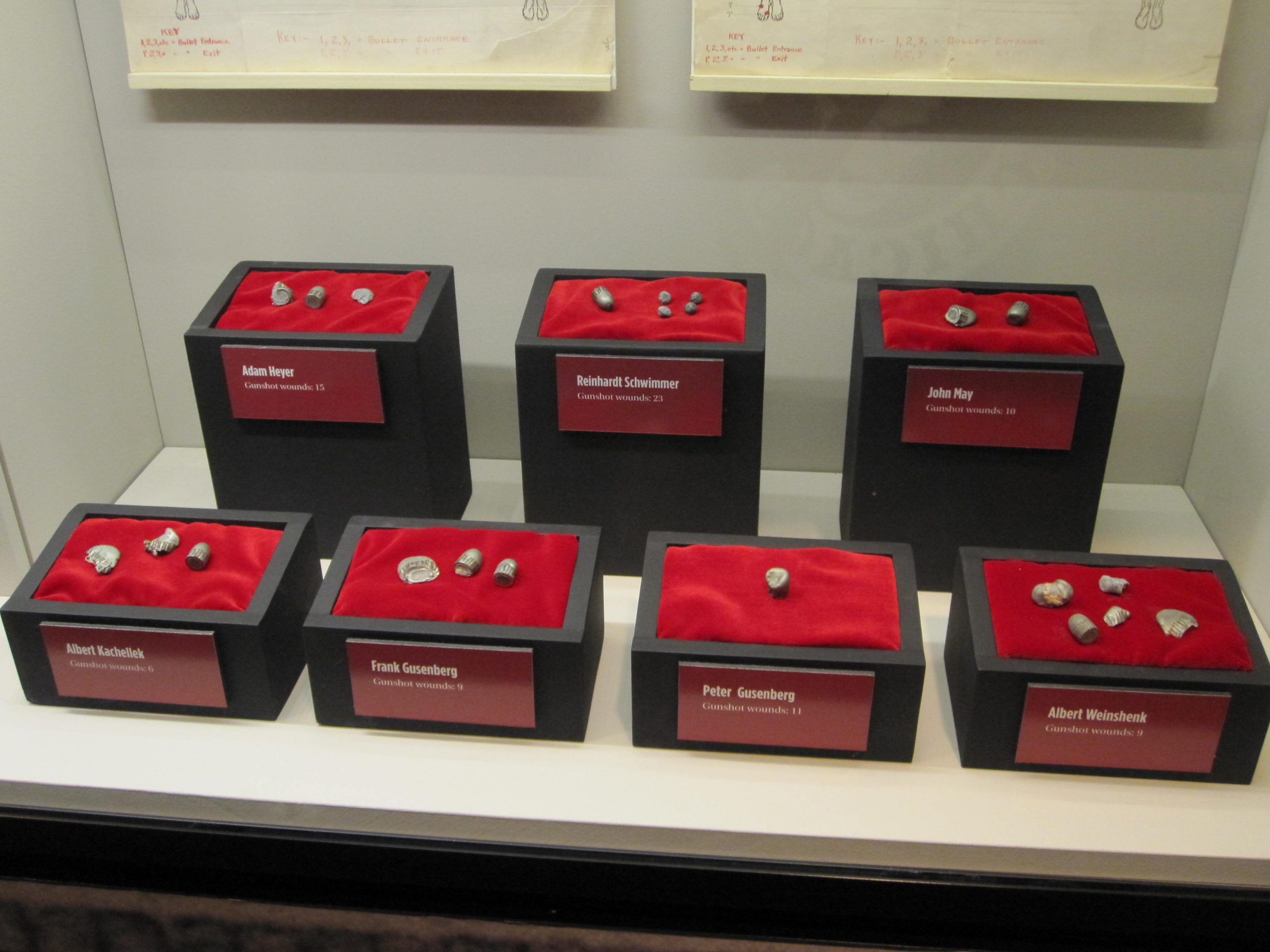 Slugs pulled out of the victims on display in Las Vegas (source: Flickr, https://www.flickr.com/photos/chicagocrimescenes/37058287596) 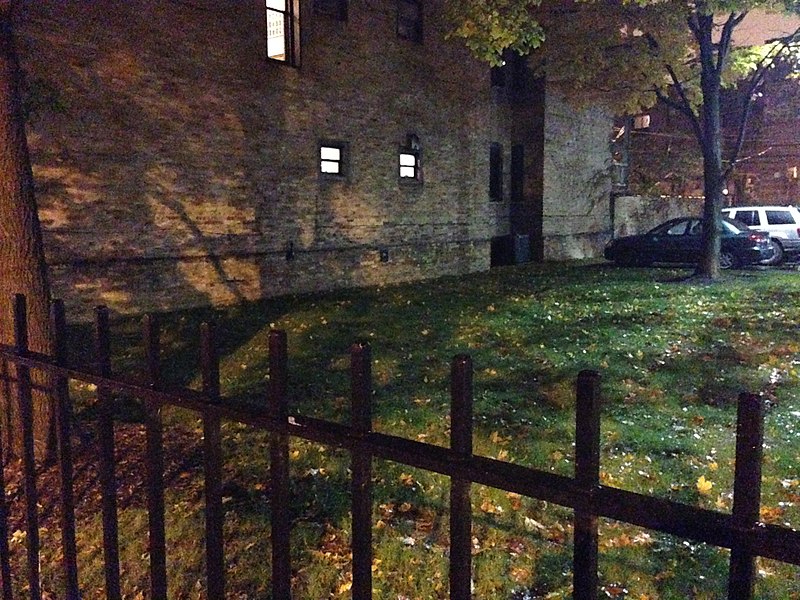 ‘Men’, New Poster For The Horror Movie With Jessie Buckley