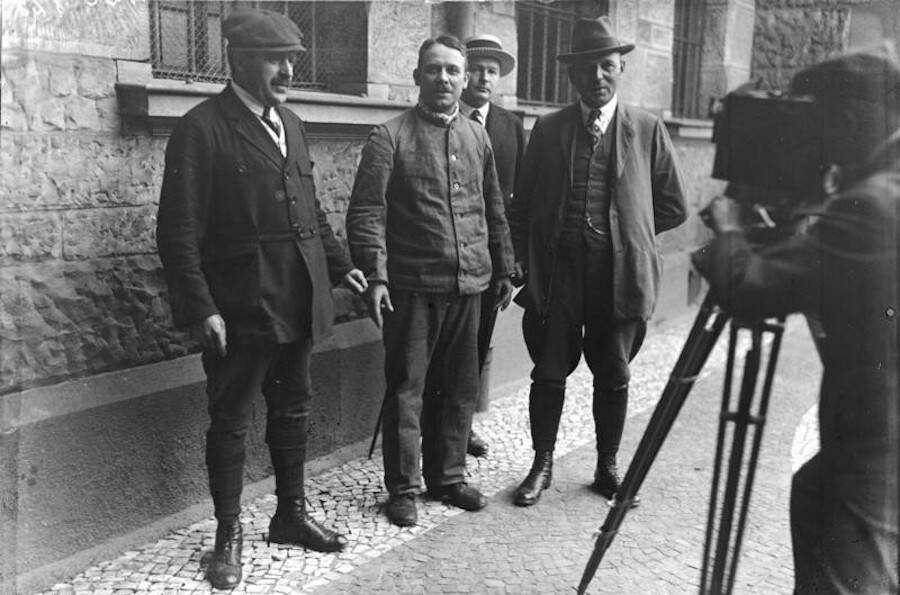 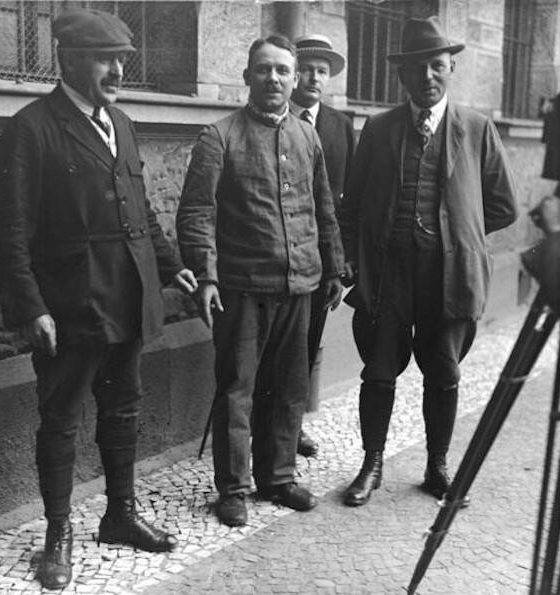 Fritz Haarmann, aka “Butcher of Hanover” is probably one of the most vicious serial-killer in the history of mankind. Haarmann butchered, killed, and mauled more than 27 young boys and men in Hanover (Germany) from 1918 to 1924.

Through film and literature, we’ve all heard the legends of monsters, vampires, and werewolves. The stories of mankind transforming into the most terrifying creatures have haunted and intrigued our imaginations for centuries. Unfortunately, for the people of Hanover, Germany one of those very monsters unleashed a reign of terror for years. (Read more down below!)

Fritz Haarmann, also known as the “Butcher of Hanover”, “Werewolf of Hanover” and “Vampire of Hanover” murdered, raped, and dismembered 27 young boys and men from 1918 to 1924. Although he was only officially charged with 27 murders, he bragged that the number was actually a lot higher with his actual victim count at 50 to 70 young men. 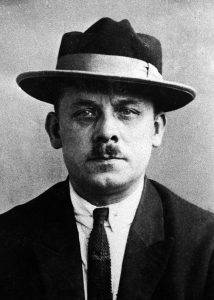 Friedrich Haarmann was born on October 25, 1879, as the sixth and youngest child. His siblings consisted of four boys (including Fritz) and two girls.  As he had feminine tendencies his mother loved to dress him up in girls’ clothing, and encouraged him to play dress up and dolls with his sisters. This resulted in Haarmann’s father who was a drunk and very abusive to grow hatred towards him. Fritz proved to be sadistic early on in his life as he loved to terrorize his sisters by tying them up and telling gruesome ghost stories late at night. He loved and fed off making them scared.

He was eight years old when he was molested by one of his teachers at school. He kept this unfortunate happening to himself and affected not only his mental health but his grades in school.  At the age of 15, Haarmann dropped out of school to join the military. This only lasted a few weeks as one day he dropped to the ground and suffered a concussion and then began to have an epileptic fit.  These fits would hinder his ranking in the military and he would have them for the rest of his life.

Haarmann had to be discharged and sent home. Luckily, his father owned a cigar factory and he secured work right away. Now 16, this is where the trouble began. By the age of 16, Fritz began to make sexual advances toward the young boys in the neighborhood.  He would lure the young men and boys into secluded areas and then assault them. He was arrested at 18 and sent to a psychiatric hospital to be “cured”. You read that right, a psychiatric hospital… not jail. As it was the 1800s,  treating his suspected homosexuality was the problem…not the fact that he raped young boys.

Haarmann’s stay at the hospital was short and his mother helped him escape and they fled to Switzerland. They laid low in Switzerland for about a year and a half before returning back to Hanover.

When they returned, Fritz met a woman named Erna Lowert and got her pregnant very early in their relationship. Before they could tie the knot Haarmann was summoned for compulsory military service. These would be the years he would describe as the best time of his life until he got troubling news.

Haarmann received news that his mother had fallen dangerously ill. This sent him into a panic and depression that triggered his epileptic attacks once again. For the second time, Haarmann would find himself being sent back home as he was seen as unfit to serve. He returns home and goes back to working for his father as he now has a family to provide for. Things go downhill very quickly. He and his father could no longer stand each other, so much so that the law had to be involved several times.

His wife Erna found out that Haarmann was having affairs with many men outside of their marriage and decided to divorce him. Now out on the street, he began committing crimes to make money. He was serious about becoming a full-time criminal this time around. His crimes were everything from petty theft, conning, burglary, and robbery. Haarmann started to desecrating tombs, robbing bodies with a female accomplice, and then selling them to shady individuals.

In 1913, he was arrested for burglary. He was found guilty of several counts of burglary and sentenced to five years in prison. However, because this was also the start of World War One he was allowed out to work in factories. Once he served his sentence he went back to a life of crime. He began befriending police officers and becoming an informant. He knew this would keep eyes off him and more surveillance on his criminal friends.

In 1918, he was 40 years old and decided to begin his killing spree. While at Hanover Station he meets this young boy Friedel Rothe. Rothe was 17 years old, living on the streets, and would become Haarmann’s first official victim.  Haarmann would continue to lure in young boys and men to their demise for years to come.

During this time he also met an 18-year-old that was living on the street named Hans Grans. He lured Grans in like all the rest of his victims. This time Haarmann took a liking to Grans. Instead of raping and murdering Grans, they began a fully consensual relationship.  Although they began a relationship it wasn’t a healthy one.  He simply put up with his sexual advances because he needed a roof over his head. Grans later claimed that he was actually never gay and had many girlfriends during that time. In addition to putting up with Haarmann’s advances toward him, he also witnessed him commit gruesome crimes.

Grans had the power to stop him but did not. Haarmann later spoke of his process. He would go out and meet disheveled young runaways or prostitutes and bring them back to his home. There he would sexually abuse them and then kill them. He would drain their blood and drink it, hence while he’s called the “Vampire of Hanover”. He also explained that he would try to bite out their Adam’s apple as he was assaulting them. As if the drinking of blood wasn’t enough.

Bones started to wash up from the river. Initially, the police didn’t worry as they assumed it was the bones of drowning victims. But once more than 500 bones began to wash up, they knew they could not all be from drowning.

Knowing that Haarmann was a homosexual and had previous charges of child molestation, the police focused on him immediately. They placed him under surveillance.

On June 24, 1924, police followed Haarmann to Hanover Station. They saw him arguing with a 15-year-old boy who would later be identified as Karl Fromm. When they approached the pair Haarmann insisted they arrest Fromm for having false papers. Fromm informed police that he had been living with Haarmann for four days and he repeatedly sexually assaulted him. The following morning Haarmann’s apartment of horror was searched and he was arrested.

If finding extensive blood stains in his apartment wasn’t damning enough, as police questioned Haarmann and witnesses, they found that many tenants, past and present, actually saw him taking out heavy sacks to the river on several occasions.

After being presented with a load of evidence against him, Haarmann confessed to the raping and killing of young men from 1918 to 1924. He described his urge as a “rabid sexual passion” and stated that initially had no intention to kill his victims but he would become entranced by the idea of biting into their Adam’s apple. 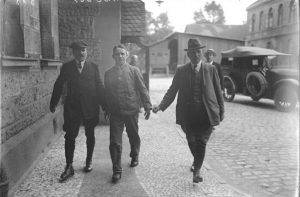 He further explained that dismembering them was his least favorite part. He would pour himself a cup of strong black coffee to complete the task that would take up to two days most of the time.

Hans Grans was unexpectedly arrested for accessory to murder on July 8, 1924. He later escaped the death penalty as Haarmann retracted his testimony that Grans had anything to do with the murders.

After being examined and deemed competent to stand trial, Haarmann was charged with 27 counts of murder. The details of the murders were so gruesome that on the third day of the trial the judge excluded all spectators from the courtroom.

After two weeks of “Charge it to me; it’s alright with me” and “I probably killed him”, Fritz Haarmann was officially found guilty of 24 out of the 27 murders and was sentenced to death by guillotine.

On April 15, 1925, at six in the morning, Fritz Haarmann was beheaded. Moments before the blade dropped he gave his last words,” I repent, but I do not fear death.”

After years of gruesome and vile crimes in Hanover, Germany the monster’s reign of terror finally came to an end. Scientists at Göttingen medical school preserved Haarmann’s head for research from 1925 to 2014. 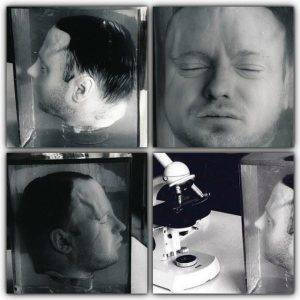 If you liked this, read more horror stories!