While scrolling through Shudder, I thought about my criteria. What’s something that honors 80s slasher films and is a just-released recent movie? Vicious Fun has a very original take on a horror movie.

Joel a nerdy 1980’s film critic for a national horror magazine, finds himself unwittingly trapped in a self-help group for serial killers. With no other choice, Joel attempts to blend in with his homicidal colleagues. Stuck with only two options – kill or be killed – Joel must match wits with five killers and make it through the night alive

Directed by Cody Calahan, he seems to have nestled together with a really great ensemble. Evan Marsh plays Joel in a very earnest way. He recognizes horror movie cliches while still realizing the possibly inevitable outcome of the unique situation he found himself in. He’s a loser whose life is passing him by but makes up for his shortcomings by figuring out the horror movie tropes he’s watched his whole life. As far as the plot for a movie goes, this has been one of the most original movies I’ve watched in recent years. It honors Fangoria Magazine in a way that I didn’t know I needed. Sure, there might be some slasher movie images, but that’s the fun of the movie!

The synth score is outstanding. For anyone who loves the soundtracks for both Drive or Stranger Things, you’re in for a good treat. I don’t want to give away any spoilers of this, but I was left wanting more. Amber Goldfarb is particularly great in this and felt like the break-out star of the movie. I’m not sure if she does her own stunts, but man she kicks ass so well. The honorable Julian Richings was also a tremendous standout. In the support group, Julian plays the “Killer Clown” of the group just because his character likes clowns. It adds to the humor of the already ridiculousness of Joel’s situation. I haven’t seen any of Cody Calahan’s work before, but I would like to visit some more of his films down the line.

Vicious Fun comes tremendously close to being a pretty great horror-comedy. It’s Tucker & Dale vs Evil meets A Nightmare on Elm Street 3: Dream Warriors. If you happen to be scrolling through, I can’t recommend it enough for people to check out. Viscous Fun now playing on Shudder. 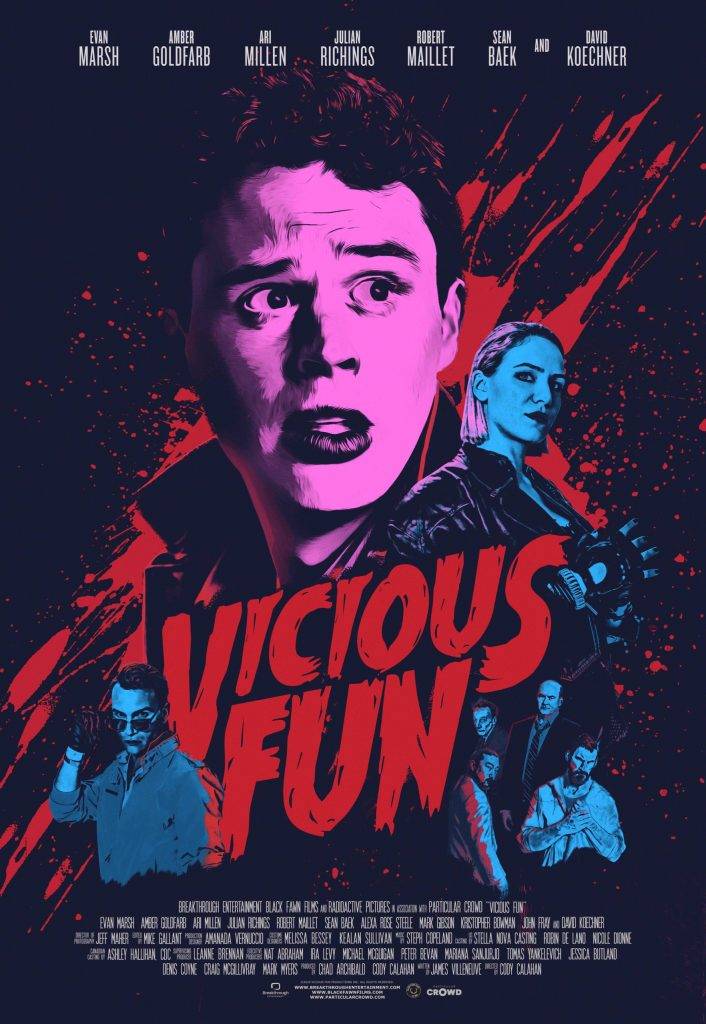