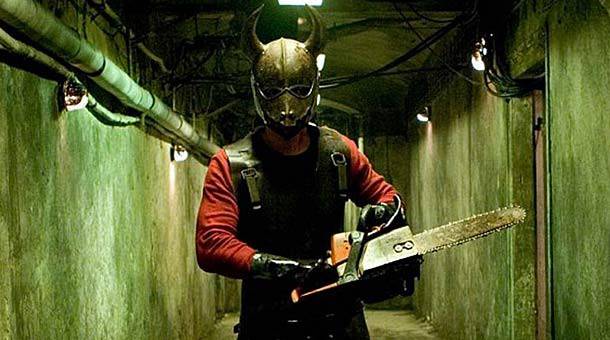 Watching Eli Roth’s Hostel in a vacuum leaves a lot of questions regarding masculinity, national identity, and gender roles that sadly are still largely unanswered even within the sequels, so let’s discuss them:

On September 11th, 2001, I was in Ms. Gilbreath’s 7th grade science class when the first tower fell. I watched people jump to their death live on an old cathode ray television that had been rolled into the classroom (you know the kind I’m talking about). I was 12 years old. Being a twelve year-old kid in the midst of a tragedy meant that I cared more about not having to go to football practice that day than whatever almost-Hollywoodlike broadcast I’d been numbly watching. However, in the following hours, days, weeks, et al. I began to witness a very clear sea change in the way our society functioned. Where there was once peace and love, there was animosity and xenophobia. The jingoism of scared consumers desensitized to the effect their violence had on the world hating a group of extremists with essentially the exact same ethos. Fear and paranoia mutated into grandiose, histrionic bravado. If you weren’t around my age at this time, you won’t understand the liminality of being a pre-teen in a world where we could watch someone’s head be sawed off on a live feed on our computers while simultaneously eating Captain Crunch and watching The Powerpuff Girls and Neon Genesis: Evangelion. However, there exists a film that acts like a perfect time capsule of post-9/11 America more than any film I’ve seen, although authorial intent I’m afraid probably can’t be credited for that.

Eli Roth’s Hostel arrived to thunderous applause as a box office smash in 2005. Riding the coat-tails of what would soon be coined as torture porn (thanks to Hostel) introduced to mainstream audiences with the previous year’s Saw, Hostel also boasted a production credit by Quentin Tarantino, and after the cult-hit of Cabin Fever, Eli Roth was the new director to watch for American horror films. One thing about Eli Roth, though, is that the man comes off like a huge tool, at least on his commentaries and in interviews, and all of his films are ensembles comprised solely of unlikeable characters. I’m not going to beat around the bush: I despise Eli Roth’s horror movies. Conversely, I do however find him to be an interesting person and filmmaker, so I go see them, and each time I leave wondering “well why did I expect that to be anything but awful?” Shit stories about shit people, these are the types of tales Eli Roth’s (a former protegee of David Lynch…yeah) horror films are made of. The unlikable characters that populate his filmography work in exactly two of his films, his first two: Cabin Fever and Hostel.

Hostel tells the story of Josh and Paxton backpacking their way through Europe with the solitary goal of getting laid. Sometime before the events of the film, they meet an Icelandic friend who is, in true Roth fashion, as obnoxious as they are. They embody the grating bravado and crass behavior that has become synonymous with the (capital A) American stereotype, doubled-down after the attacks on the World Trade Center on September 11th. Along their journey in Amsterdam, they meet with a series of interesting and mysterious figures that inform them they want to go East, not to the vacation spots of Madrid and Barcelona, to meet women; women in the East throw themselves at vacationing men, especially from the United States. By all accounts, this is a basic setup for a nightmare situation in any horror film’s formula, and Hostel is no exception. The men arrive to a remote town in Slovakia, and find their way to the fabled titular hostel where they are to share a room with two beautiful women who indeed verbally and physically throw themselves at these men craven for carnal pleasure. What ensues is precisely what we all signed up for when buying a ticket to this gore-fest. The men are systematically drugged, tortured, and killed, and through these events we learn of the racket that has been set up at this and other hostels. Tourists are lured to this town with promises of whatever they desire only to be maimed and beaten and ultimately disposed of by would-be serial killers paying top dollar to a mysterious organization for the privilege of hurting another human being. Different nationalities cost different prices with Americans being the most expensive and sought after, our bravado finally forcing us to reap what we’ve sown.

Torture Porn films that followed Hostel tended to keep with a typical formula of someone or some group of people being somewhere they “don’t belong” being kidnapped, tortured, killed, and in keeping with the genre, generally end with a singular hero(ine) making it out alive with a fine dose of sequel-bait sprinkled on top for good measure. In the mid-2000s, this subgenre of horror was churning out a movie a week and making massive amounts of box office money. In nearly all these movies, it is always the “other” who is being hunted and hurt, and in a great deal of them, especially those made by US studios, the other is an American. Hostel was the first to take this premise and run with it, but what a peculiar time in the world, and especially the United States, for us to see ourselves as the Other while we invade countries that had nothing to do what an attack we suffered. Of course, this is just a generalization of these films, and many of them do have substance beyond gore (see: many films in the French Extremity movement or the films of Takashi Miike (who has a brief cameo in Hostel)). It may be surprising to hear, and it’s certainly something I never expected to say, but the substance of Hostel in a post-9/11 America is as thick as molasses.

In Hostel, although our protagonists are American men, it is not only American men — hell not even just men — who are preyed upon. In a pivotal climax after our hero Paxton has escaped his torture by some clever ingenuity and sheer dumb luck, a Japanese woman who has had her face burned off with a blow torch — an image reminiscent of Junji Ito’s art — is both saved by Paxton after he hears her cries for help, and commits suicide which ensures he is able to escape to safety at the end of the film. I’ve always wondered what brought her to this place. Certainly the pleasures and desires of two brash American men would clash with those of a meek Japanese woman, but perhaps not.

Why Do Men Hate Midsommar?

Snuff Films, Convictions & The Truth Behind The Myth

Brent Vickers is a writer and editor from Houston, TX. He is a horror and sci-fi genre enthusiast, and loves everything gory, creepy, and crawly. When he isn't watching movies he can be found reading, writing, drinking at a bar, or sleeping snuggled with his cat, Fiona.